Cookie preferences
This website uses cookies, which are necessary for the technical operation of the website and are always set. Other cookies, which increase the comfort when using this website, are used for direct advertising or to facilitate interaction with other websites and social networks, are only set with your consent.
Configuration
Technically required
These cookies are necessary for the basic functions of the shop.
"Allow all cookies" cookie
"Decline all cookies" cookie
CSRF token
Cookie preferences
Currency change
Customer recognition
Customer-specific caching
Individual prices
PayPal payments
Selected shop
Session
Comfort functions
These cookies are used to make the shopping experience even more appealing, for example for the recognition of the visitor.
Wish list
Statistics & Tracking
Affiliate program
Track device being used
Categories
Information 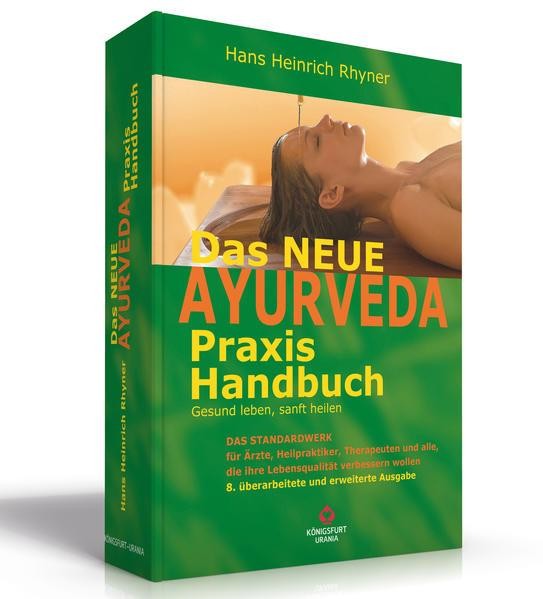 A comprehensive basic work, which is aimed both at medical practitioners, alternative practitioners and therapists as well as interested people who want to live more consciously, healthier and want to deal more intensively with Ayurveda. On 608 pages the aspects of the Ayurvedic healing art are treated. Starting with the history, there are chapters on anatomy, constitution, diagnosis and remedies, nutrition and health, therapies, chapters on psychiatry, surgery and gynecology. The importance of yoga in Ayurveda is discussed as well as the way of living. The appendix contains a detailed glossary of terms as well as an index.

Dr. Hans Heinrich Rhyner is a recognized Ayurveda expert and pioneer of the first hour both in India, the country of origin, and in Europe. Born in Switzerland, he has been practicing Ayurveda and Yoga in India for over 20 years. In Bangalore he received a doctorate in alternative medicine and philosophy and ran his own clinic. Since 1992 he has been ordaining in his practice of Ayurvedic medicine in Herisau. From 2003 to 2009 he ran his Ayurveda spa 50 km north of Vienna. In Austria is also the own production for biological Ayurveda products, which he runs with his wife Irene Rhyner. He is vice president of the Swiss Association of Ayurvedic Physicians and Therapists (VSAMT), president of the Austrian Umbrella Association for Ayurveda (ÖDA) and a long-standing member of the Swiss Naturopathic Association (NVS).

This Ayurveda book skillfully spans the gap between Indian Ayurveda and European cuisine. Suitable for both beginners and experts.

Customer Services
This website uses cookies, which are necessary for the technical operation of the website and are always set. Other cookies, which increase the usability of this website, serve for direct advertising or simplify interaction with other websites and social networks, will only be used with your consent.
Decline Configure